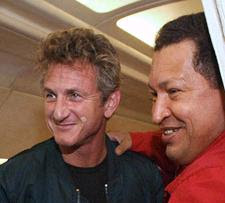 I know President Chavez well. Whether or not one agrees with all his policies, what is certainly true of Chavez is that he is a warm and friendly man with a robust sense of humor (who daily risks his own life for his country in ways Dick Cheney could never imagine). To treat such a man coldly is akin to spitting on him. As a country we’ve done enough of that. Say what you will, but it has only resulted in the self-celebration of our smirking spitters, while costing us international respect, American lives, and left wounds in the hands of our children’s future. The Cheneys, down to the O’Reillys and Hannitys and Limbaughs, effectively hate the principles upon which we were founded. They are among the greatest cowards in all of American history. I applaud an American President who’s tough enough…to smile.