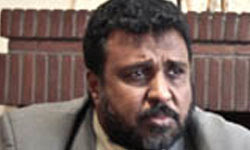 Here’s the latest paranoid anti-Semitism from the Arab World.
The Sudanese envoy to Tehran told the Iranian regime that Israeli intelligence was behind the unrest in Darfur.
Iranian Fars News reported:

Sudan’s envoy to Tehran stressed the role of the Israeli Intelligence service, Mossad, in stirring unrests and insecurity in his country, and said the arrest warrant issued for Omar al-Bashir aimed to help establishment of an independent state in Darfur to support West’s interests in the African country.

Noting that the US, Britain, France and Israel gain benefit from unrests in Sudan and that they have made lots of efforts to sow discord in the country, Sudanese Ambassador to Iran Soleiman Abd-al-Tavvab Al-Zein told FNA, “We have plenty of documents that prove Israel’s interference in Sudan’s internal affairs.”

He described Israel as a threat to the Middle East, Africa and the Arab world and said, “First I should say that there are some (actors) behind the stage that provide the poor people in Darfur with weapons and financial aids to form armed forces and (provide) whatever needed for stirring insecurity (in Sudan).”

“If we pay more attention to the issue, we will see Mossad and other espionage and intelligence services of the West have a hand in creating insecurity in Sudan.”