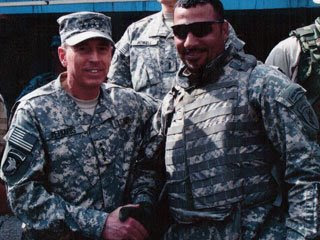 Jasim, pictured here with Gen. David Petraeus, is an Iraqi translator who served heroically with the U.S. Army but whose life is at risk after being denied a U.S. entrance visa.
* * * * *

Blackfive reported on a disturbing story today.
The State Department has refused to let an Iraq War hero into the US:

The State Department has made a decision to make an Iraqi translator, Jasim, wait another three years for a visa. One of the reasons that the denial was issued was that, Jasim, as part of the Kurdish Peshmerga, infiltrated Uday Hussein’s organization to steal data and then stole Uday’s car to escape. He was captured, tortured, and then released six years later when Saddam let all the prisoners go on the eve of the Invasion in 2003.

The theft of Uday’s car is looked upon as criminal and not political.

“On several occasions while our guys were putting rounds down range, Jasim put himself in harm’s way to pull the wounded out and treat them,” Keene said. “Jasim is a hero to everyone he has ever met.”

After the invasion, Jasim became a legendary translator, assisting above and beyond.

“I owe my life to Jasim … hands down,” said Master Sgt. Jason Krieger, who went on over 200 combat patrols with Jasim. “I consider him a brother, not only in arms, but in love as well.”

For six years, Jasim has put his life on the line to help our troops.

Be polite, be professional, be unwavering in letting them know they are going to be hearing a lot more about this bureaucratic issue that could easily be resolved.