Rep. Donald Payne was against US and Ethiopian forces ousting the Islamic Courts from Somalia back in 2006.
Now they are back in power.
Insurgents fired on his plane this morning in Somalia. 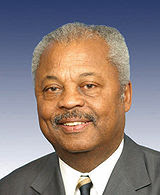 Liberal Rep. Donald Payne was against the invasion of Somalia in 2006 that ousted the Islamic Courts from power.

Somali insurgents fired mortars toward U.S. congressman Donald Payne as he left Somalia on Monday after a rare visit by a U.S. politician to the anarchic Horn of Africa nation, police said.

Somalia’s capital Mogadishu is one of the world’s most dangerous places. U.S. officials have shunned travel to the battle-scarred city due to constant violence.

Somali Internal Security Minister Omar Hashi Aden told Reuters Payne’s plane was airborne when the mortars fell. An African Union (AU) spokesman denied the attack on the airport — which is under AU control — had happened.

A police officer, however, said mortars struck the airport.

“One mortar landed at the airport when Payne’s plane was due to fly and five others after he left, and no one was hurt,” an officer at the airstrip told Reuters.

Residents said insurgents and AU soldiers exchanged fire after the attack, killing three people and wounding 12 others near a main market in Mogadishu…

Payne is in his 10th term in the U.S. House of Representatives and was first elected in 1988. He is chairman of the Congressional Black Caucus and of the House Foreign Affairs Subcommittee on Africa and Global Health…

Payne criticised Ethiopia’s invasion of Somalia in late 2006, when Addis Ababa sent thousands of troops to crush an Islamist movement that had taken control of much of the south.

That attack ousted Sheikh Sharif Ahmed, then an Islamist leader in Mogadishu and now president of the government.

One of its founders, Aden Hashi Farah “Eyrow”, trained with Al-Qaeda in Afghanistan. But President Obama gave his blessing to ICU leader Sheik Sharif Ahmed‘s appointment as President of Somalia. 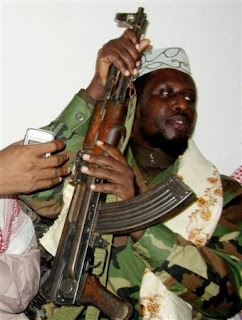 President Sharif Ahmed of Somalia was leader of the Islamic Courts Union. The Obama Administration views Ahmed as a moderate. (Interet-General)