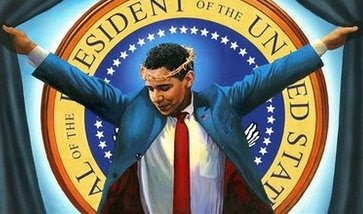 “The Truth” by Michael D’Antuono (WND)

On his 100th day in office, President Obama will be “crowned” in messianic imagery at New York City’s Union Square.

Artist Michael D’Antuono’s painting “The Truth” – featuring Obama with his arms outstretched and wearing a crown of thorns upon his head – will be unveiled on April 29 at the Square’s South Plaza.

According to a statement released about the portrait, “The 30″ x 54″ acrylic painting on canvas depicts President Obama appearing much like Jesus Christ on the Cross: atop his head, a crown of thorns; behind him, the dark veil being lifted (or lowered) on the Presidential Seal. But is he revealing or concealing, and is he being crucified or glorified?”

Even the title of the piece, “The Truth,” suggests a play on biblical themes, as Jesus said in John 14:6, “I am the way, the truth, and the life: no man cometh unto the Father, but by me.”