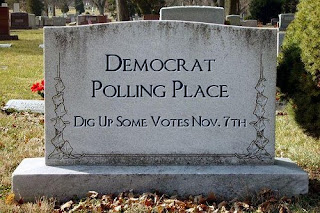 This is not exactly earth-shattering news-
Detroit is the latest liberal bastion to admit that it has more registered voters than residents.
The Blog Prof reported this from Freep.com:

Detroit election officials confirmed Monday what an analysis of census and population records shows: The city has more registered voters than it has residents over the voting age of 18.

At least all of those dead voters can find cheap housing.