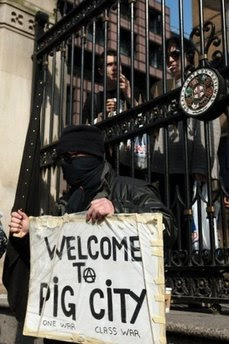 Yes We Can… Trash London. G20 protesters protestors march from Cannon Street station to the Bank of England on April 1, 2009. Angry protestors smashed through police lines and broke into a bank in London’s financial district on Wednesday, amid ugly scenes on the eve of a major economic summit here. (AFP/Geoff Caddick)

The protesters tried to storm the Royal Bank of Scotland today.
The rioters jammed downtown London and targeted banks: