Shucks. And, that peace deal was working out so well.
After all, the Islamists only pushed into one outside province during the month-long agreement and fought deadly gunbattles with villagers and police.

This is such a stunner. 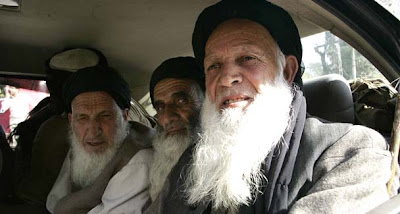 They look like such a respectable group of peace-loving Islamists.
Sufi Muhammad and the moderate Taliban surprised everyone today and called off their peace pact in Swat. They say the government was too slow in implementing Sharia Law.

The chief of outlawed Tehreek e Nifaz e Shariat Mohammedi has withdrawn from the peace deal with the government and has said all peace camps in the region will be abolished, DawnNews has reported.

Mohammed, who brokered the peace deal between the Taliban and the government of Pakistan has claimed that the authorities have used delaying tactics in imposing the Nizam-i-Adal (Islamic courts) in the Swat region.

The announcement casts serious doubt on the durability of a cease-fire in the Swat valley that U.S. officials worry will create another sanctuary for allies of al-Qaida responsible for a rising tide of violence in the nuclear-armed country.

Imposing Islamic law in Swat, a one-time tourist haven, was the key plank of an accord worked out in February between the provincial government and Sufi Muhammad, a cleric who once led thousands of volunteers to fight U.S. forces in Afghanistan but has since renounced violence.

Thanks in part to Muhammad’s mediation, the agreement ended 18 months of terror and bloody clashes that had left hundreds dead and forced up to one-third of the previously prosperous valley’s 1.5 million residents to flee…

Muhammad, who had been camped out in the valley’s main town of Mingora with hundreds of black-turbaned supporters, said they were leaving to protest Zardari’s ‘negative attitude.’

Television footage showed dozens of Muhammad’s supporters crammed into a column of cars and driving out of Mingora, some of them clutching black and white flags.