And, just think? It has not even been 100 days yet!
Team Obama will release 44 photos depicting abusive treatment of detainees in Iraq and Afghanistan. 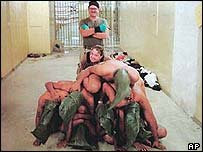 The America-hating Left will love this– More images for their commercials!
FOX News reported:

The Department of Defense — on the heels of the firestorm over the release of Bush-era memos on CIA interrogation techniques — said Thursday it plans to make public at least 44 photos depicting potentially abusive treatment of detainees at prisons in Iraq and Afghanistan.

The decision to release the photos was announced Thursday in a letter filed in a federal court in response to a Freedom of Information Act lawsuit filed by the American Civil Liberties Union in 2004.

It sets a May 28 deadline for the Department of Defense to produce 21 images that the court in 2006 ordered the government to release and 23 additional related images, as well as “a substantial number of other images” in the Army’s possession.

The images were part of the military’s investigation of potential abuse of detainees by U.S. personnel at facilities other than Iraq Abu Ghraib, though the photos apparently aren’t as shocking as those that set off a prisoner abuse scandal in 2004, the Los Angeles Times reports.

The release of the photos along with Obama’s decision last week to release CIA memos has federal agents feeling dispirited.
Jake Tapper reported:

Calling the ACLU push to release the photographs “prurient” and “reprehensible,” Dr. Mark M. Lowenthal, former Assistant Director of Central Intelligence for Analysis and Production, tells ABC News that the Obama administration should have taken the case all the way to the Supreme Court.

“They should have fought it all the way; if they lost, they lost,” Lowenthal said. “There’s nothing to be gained from it. There’s no substantive reason why those photos have to be released.”

Lowenthal said the president’s moves in the last week have left many in the CIA dispirited, based on “the undercurrent I’ve been getting from colleagues still in the building, or colleagues who have left not that long ago.”

“We ask these people to do extremely dangerous things, things they’ve been ordered to do by legal authorities, with the understanding that they will get top cover if something goes wrong,” Lowenthal says. “They don’t believe they have that cover anymore.” Releasing the photographs “will make it much worse,” he said.