Leave it to Far Left AP reporter Jennifer Loven to twist yesterday’s rescue of Captain Richard Phillips as a big win for Obama: 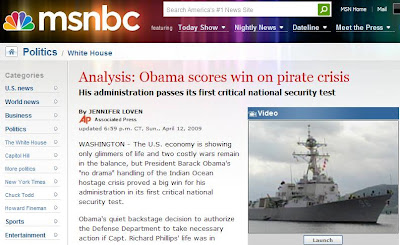 The Political Inquirer may have said it best:

…Against 4 lightly armed pirates in an out-of-gas lifeboat with a single hostage, taking 4 days to pass.

…As a bit player who issued a general instruction on force that he had to clarify the next day and even that was stretched unbelievably to carry out a successful rescue by the line officers.

The MSM (especially MSNBC) certainly have dumbed down the ‘testing’, haven’t they?

And, don’t forget that one of the pirates was a 16 year-old with a hole in his hand after one of the ship’s sailors put an ice pick through it.

And, don’t forget that it was the on scene commander gave the call to fire on the pirates after he observed one of the pirates in the lifeboat pointing an AK-47 at the back of a tied up Phillips.

Since Cut-n-Runner Barack Obama was completely wrong on the surge and wrong on Iraq, look for the media to make him some kind of a hero for the captain’s rescue.