It didn’t take 100 days for us to see that Barack Obama is no Ronald Reagan.
This week Obama promised to weaken our national defense, bashed America while in Europe, told the world we were torturers, and handed over our rights at the G20.
If anything, Barack Obama proved himself to be just the opposite of Ronald Reagan.

Bob McCarty notes that on slavery, Barack Obama is no Lincoln, either: 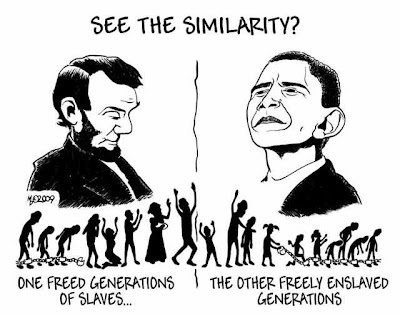 Cartoon via My Personal Litmus

Presidents Abraham Lincoln and Barack Obama share several things in common: Both were lawyers; both served in the Illinois legislature; and both were elected president of the United States. When it comes to the issue of slavery, however, the men share nothing in common.

While President Lincoln worked hard to earn a place in modern history books as the man most responsible for ending slavery in the United States, President Obama seems focused upon returning today’s Americans — as well as generations of future Americans — into a different kind of slavery known as financial bondage.

It’s hard to argue with that.
Oh, and while Lincoln freed the slaves… Barack Obama’s family owned them.