Preident Obama is finally focusing on the enemy and is ready to take action.
No… Not the terrorists– the Bush Administration officials.
Obama said today that he may prosecute Bush officials who wrote harsh terrorists interrogation policies. 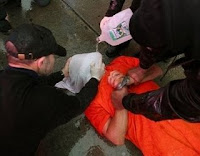 According to a former intelligence agent, waterboarding of terrorist Abu Zubaydah got him to talk in less than 35 seconds. The technique, which critics say is torture, probably disrupted “dozens” of planned al-Qaida attacks and saved hundreds and thousands of lives.

It would be up to the attorney general whether to prosecute, Mr Obama said.

The memos detailed the range of techniques the CIA could use for questioning terror suspects.

Mr Obama had said he would not use anti-torture laws to prosecute CIA personnel who relied in good faith on legal opinions issued after 9/11.

The BBC’s James Coomarasamy in Washington says the president’s comments marked a change of tone amid growing pressure from the Democratic Party not to rule out potential prosecutions.

As Dick Cheney said– RELEASE THE CIA MEMOS!
Let the American people judge just how effective these tactics were on gathering information that saved thousands of lives.
Then go ahead with your prosectution.

Is there anyone out there who still believes this anti-American Leftist is a moderate?

More… The CIA confirmed that waterboarding of 9/11 mastermind Led to Info that aborted 9/11-style attack on Los Angeles.