After bashing the Iraq War from Great Britain to Turkey Barack Obama further insulted the troops today by telling them that now was the time to start transferring sovereignty to the Iraqis.
Iraqi Aswat Aliraq News reported:

“The coming 18 months may pose a danger to Iraq, and the time has come to transfer ‘sovereignty’ to Iraqis to run their own affairs,” Obama said.

What was completely missed by Obama was that 13 of 18 provinces are already completely under Iraqi control.
This was a horrible insult to the troops. 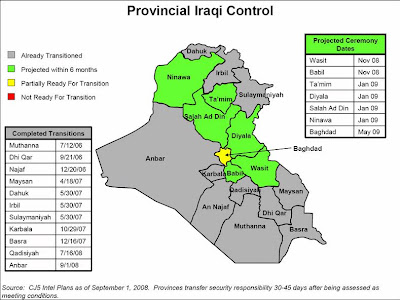 (Wikipedia)
He probably was so busy bashing the war these last few years that he didn’t realize they were making progress.
It makes you wonder if he even knows how many provinces there are in Iraq?

Jim Hoft
Jim Hoft is the founder and editor of The Gateway Pundit, one of the top conservative news outlets in America. Jim was awarded the Reed Irvine Accuracy in Media Award in 2013 and is the proud recipient of the Breitbart Award for Excellence in Online Journalism from the Americans for Prosperity Foundation in May 2016.
Dirty Cop Chris Wray Says He Has Seen No Evidence of Voter Fraud -- Is Fine with Illegal Ballot Harvesting by Democrats to Steal 2020 Election
UPDATE: Democrat Lawmaker Attica Scott - the Author of Breonna's Law - And Her Daughter Arrested for Rioting in the Streets, Breaking Curfew (VIDEO)
Trump Campaign Legal Adviser Jenna Ellis Answers Pressing Questions on the Upcoming Supreme Court Battle (VIDEO)
Teen Kyle Rittenhouse Appears in Illinois Court - Attorneys Challenge Extradition to Wisconsin
America’s Richest Self-Made Woman and Three Others Forced to Resign as Trustees from WI College Because of Trump Support
See more...