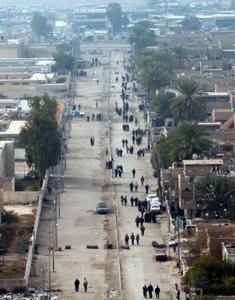 Iraqis walk to polling stations to vote in their first democratic elections in 2005.

Welcomed with thunderous cheers, President Barack Obama pledged on Friday to work repair damaged relations with Europe, saying the world came together following the 2001 terrorist attacks but then “we got sidetracked by Iraq.”

“We must be honest with ourselves,” Obama said. “In recent years, we’ve allowed our alliance to drift.”

The new U.S. president said that despite the bitter feelings that were generated by Iraq, the United States and its allies must stand together because “al-Qaida is still a threat.”

Speaking before a French and German audience at a town-hall style gathering, Obama encouraged skeptical Europe to support his retooled strategy for rooting out terrorism suspects in Afghanistan and Pakistan.

“We got sidetracked by Iraq and we have not fully recovered that initial insight that we have a mutual interest in ensuring that organizations like al-Qaida cannot operate,” he said. “I think it is important for Europe to understand that even though I am president and George Bush is not president, al-Qaida is still a threat.”

For the record, the majority of European countries, except Spain, elected Pro-US leaders during the Bush years.
The new European leaders are also more conservative than President Obama.

At last report, the US still has troops serving in Iraq.

More… His speech in Strasbourg went further than any United States president in history in criticising his own country’s action while standing on foreign soil.