The most transparent and accountable administration in history finally announced the location of the town hall meeting scheduled in the St. Louis area on Wednesday.

Team Obama chose Fox High School in Arnold Missouri as the site of the meeting. President Obama will be at the rural St. Louis school at 10:20 AM to brag about his first 100 days of destruction.

Thousands of Missourians already spoke out against the president’s policies earlier this month.

As many as 10,000 protesters rallied against Obama and the Democrat’s historic spending bills at a Tax Day Tea Party event in St. Louis.

The White House says President Barack Obama’s town hall meeting on his 100th day in office will be in Arnold on Wednesday.

The event is scheduled for 10:20 a.m. at Fox Senior High School in the suburban St. Louis city. The White House says the event is open to the public, but a ticket is needed. Doors open at 8 a.m.

The White House has said Obama will discuss his first 100 days in office and take questions about the administration’s agenda.

The 100th day in office is often used to measure the performance of a president in his first term. 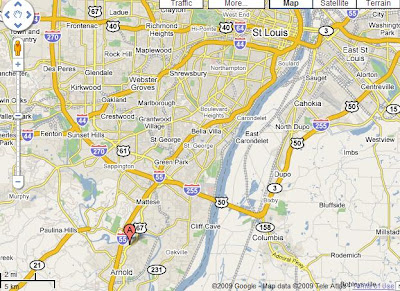 UPDATE: I spoke with Bill Hennessy tonight who was one of the key organizers of the St. Louis Tea Party Protest on April 15th.
We are planning on meeting before the event at 9:15 AM. We would like to meet up near the high school in Arnold. Check back here or at The St. Louis Tea Party website later for more details.

UPDATE 2: Here’s how to get tickets to the event on Wednesday morning:
http://www.whitehouse.gov/the_press_office/arnoldtownhallregistration/