It figures. Obama’s gift to the Queen was made in China.
Nice work, Barack. 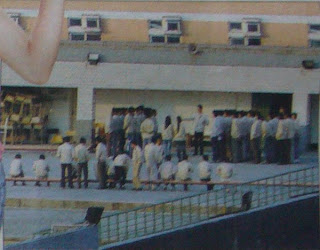 A look at iPod City in China where workers earn only £27 per month.

Obama’s iPod gift to the Queen of England is made in Chinese factories by women who make only £27 per month.
Legal Insurrection reported on this:

Apple’s iPods are made by mainly female workers who earn as little as £27 per month, according to a report in the Mail on Sunday yesterday.

The report, ‘iPod City’, isn’t available online. It offers photographs taken from inside the factories that make Apple music players, situated in China and owned by Foxconn.

The Mail visited some of these factories and spoke with staff there. It reports that Foxconn’s Longhua plant houses 200,000 workers, remarking: “This iPod City has a population bigger than Newcastle’s.”

The report claims Longhua’s workers live in dormitories that house 100 people, and that visitors from the outside world are not permitted. Workers toil for 15-hours a day to make the iconic music player, the report claims. They earn £27 per month.

The report reveals that the iPod nano is made in a five-storey factory (E3) that is secured by police officers.

Previously:
Obamas Embarrass America- Give Queen an iPod… She Already Has One (Video)
Royal Narcissist!… Obama Uploaded HIS SPEECHES To Queen’s iPod