Best Line of the Day comes from the Greenville, S.C., Tea Party:

“They will be selling the ‘Obama burger’ — you pay for one and they cut it in half and give the rest to the guy behind you for free!!”

There were bagpipes at the Tea Party in Montgomery: 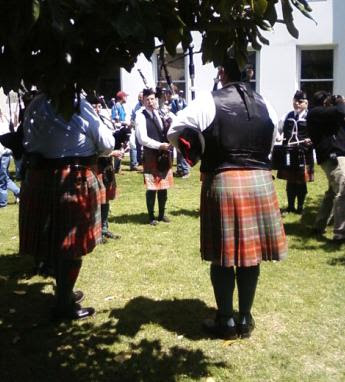 The Virtuous Republic has photos from Cincinnati where at least 5,000 showed up.

There was a better than expected showing at Virginia Beach, VA’s Towne Center, and the weather seemed to break long enough for all to have a dry and exciting rally. I would say 1000+ showed for the 2 hr event, but I am poor at visual estimations. The people were friendly, peaceful – not extremist and terrorist like – and were really disgusted and pissed with the direction the administration was taking the nation; another is planned for June, which will include food, yum.

One thing I noted was there was no news organization there other than PJTV. If the major 3 are not there to record the rally, does that mean it did not happen? 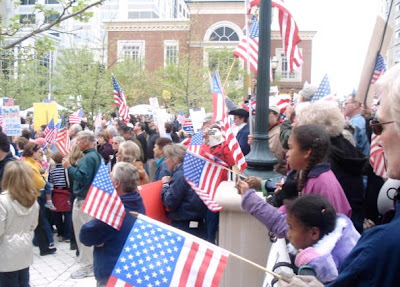 Charlie Foxtrot has photos from the Warner Robins, Georgia protest.

Just got home from it. Boy was it great. I am not the best guesser at numbers so I will say it looked like more than 400 to me-I think it even was more than that though. It really was a sea of people the camera couldnt get all at once and the state house steps were packed so I couldn’t get an elevated shot of all.

Here’s a photo from the Rhode Island State House steps: 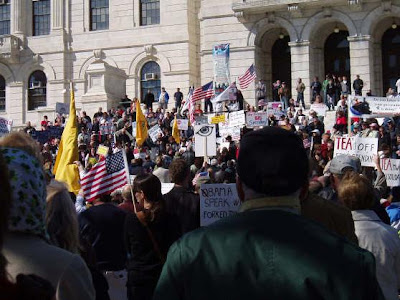 John at Power Line has photos from the protest at the Minnesota State Capitol in St. Paul.

More… Ace has a roundup from the protests around the country.

Oh, and the patriots from Daily Kos were at the San Francisco rally.
Hat Tip Candy

UPDATE: Here is another good video from Chicago.