Defend Our Marines is following the Fallujah Case.
Marine Sergeant Ryan Weemer was acquitted today of murdering an Islamist detainee. 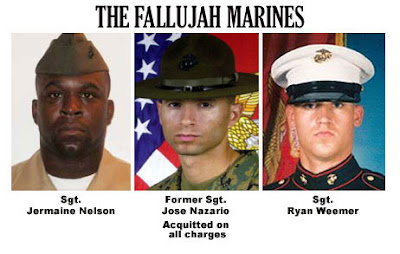 Defend Our Marines was the first website to break the story behind the investigation into an incident arising from combat in Fallujah in 2004.

** Sgt. Jermaine Nelson is charged with unpremeditated murder and dereliction of duty. He has pleaded not guilty. His court martial was scheduled for the week of February 16th, but has been delayed due to motion filings.

** Sgt. Ryan Weemer faces the same charges as Sgt Nelson and is currently on trial at Camp Pendleton. Today Sgt. Weemer was acqitted of murder.

** Jose Nazario was acquitted on all counts on August 28, 2008 by a civilian jury. (Click at the link for a complete report of the trial.)

Marine Sergeant Ryan Weemer was acquitted today of murdering an Islamist detainee in the Battle of Fallujah.
FOX News reported:

A military jury has acquitted an Illinois Marine sergeant on charges of murdering an unarmed detainee during battle in Fallujah, Iraq.

The jury of eight Marines who served in Iraq or Afghanistan also acquitted Sgt. Ryan Weemer on Thursday of dereliction of duty in the November 2004 death.

The defense argued during closing arguments that the 26-year-old Weemer acted in self-defense.