Snow and ice continued to cripple Denver on Friday. 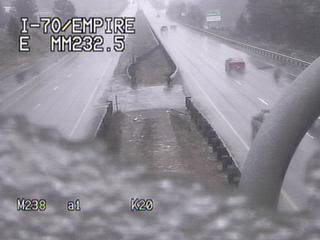 Ice had begun to coat the Colorado Department of Transportation camera on Interstate 70 at Empire at midday today. (CDOT)

Leftists continued their assault on America Friday.
A liberal federal court nixed expanding oil and gas drilling off the coast in Alaska.
They used global warming junk science to come to their decision.
The Washington Times reported:

A federal appeals court ruled Friday that the Bush administration did not properly study the environmental impact of expanding oil and gas drilling off the Alaska coast and canceled a program to find new reserves.

A three-judge panel in Washington found that the Bush-era Interior Department failed to consider the effect on the environment and marine life before it began the process in August 2005 to expand an oil and gas leasing program in the Beaufort, Bering and Chukchi seas.

It wasn’t entirely clear whether the decision applies to other areas of the same expanded offshore drilling program, including tracks in the Gulf of Mexico and along the Atlantic Coast.

Only 34% of Americans believe global warming is caused by human activity.

Democrats also will put new pollution limits on cars and manufacturing it was reported yesterday.

More… Ice is expanding in much of Antarctica, contrary to the widespread public belief that global warming is melting the continental ice cap.