You may have missed this.
It was on Keith Olbermann’s show. 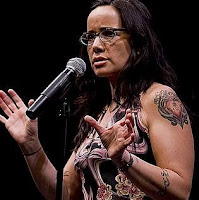 “Let’s be very honest about what this is about. This is not about bashing Democrats. It’s not about taxes. They have no idea what the Boston Tea party was about. They don’t know their history at all. It’s about hating a black man in the White House,” she said on MSNBC’s “The Countdown” with Keith Olbermann Thursday evening. “This is racism straight up and is nothing but a bunch of teabagging rednecks. There is no way around that.”

Olbermann did not once try to challenge her on those assertions.

The actress went on to describe the brain size of typical “right-winger, Republican or conservative or your average white power activist.”

“Their synapses are misfiring. … It is a neurological problem we are dealing with,” she said. This isn’t the first time she’s offered this analysis, either. Ms. Garofalo said similar things about Alaskan GOP Governor Sarah Palin’s brain last February in an interview with an environmental blog.

What a disgusting bunch…
They’re cracking sick sex jokes, calling fiscal conservatives neo-Nazis or calling them racists.
The Left has really outdone itself this week.

Lefty-approved use of “tea bagging” as a sexual reference – check

Do they stamp these clowns out on some hidden lefty assembly line?