“The Average Age at These Things Had to Be 72.4. They put every old crank in the country at these things.”

Well, I’m not sure if I saw any 72.4 year-olds at the Tax Day Tea Party in St. Louis…
But they are certainly welcome.

And, by golly… There were even minorities at the Tea Party protests: 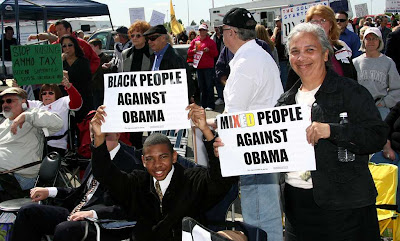 Just ask Kevin Jackson from The Black Sphere who was the emcee at the St. Louis protest.

OK this is confirmation that they are really worried. They trot out Carville and Axelrod in addition to Pravda, all the nutbag trolls, Dems in Congress and Hollywood toxic assets like Garofalo

You know you’ve hit the mark, dead center, maximum impact, when they bring out everyone in their arsenal to discredit it. They only do that when they really, really,need to push an agenda.

Related… By the way Kevin Jackson has more on the racist Garafalo to the rescue.