The United Nations sham continues…
Ahmadinejad wants to wipe Israel off the map. 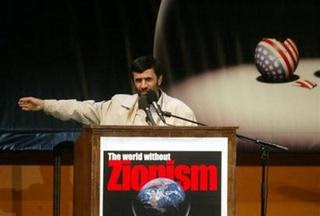 The Durban II conference will be held by the UN and with support of African states and others with antiracism on the agenda.

The review conference will run from April 20 to 22 and is to host 4500 popular organizations and groups working on human rights and fight against discrimination and racism.

Iranian NGOs which are active in women’s rights and antiracism organizations will also take part in the conference. 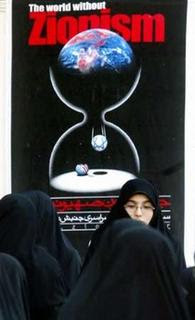 Iranian conservative students stand under a poster during the conference ‘The World without Zionism’ in Tehran October 26, 2005. Iran’s President Ahmedinejad said that Israel should be “wiped off the map.” (Reuters)