Some things never change…
The American media is still turning a blind eye on Saddam Hussein’s mass graves and genocide in Iraq.
It doesn’t fit their narrative.

Saddam Hussein murdered 182,000 Iraqis during the Anfal campaign in the early 80’s.
This was more than Al-Qaeda and insurgents managed to kill over the past 6 years of war. 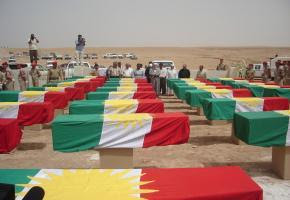 Ceremonies on Tuesday were held in Kurdistan’s southern area of Kermyan to mark the burial of the remains of 187 victims of al-Anfal campaign in the presence of thousands of local residents.

The coffins carrying the bodies were wrapped in the Kurdistan region’s flags and prayers were offered for the souls of the victims in the midst of an increased security presence.

The Kermyan mayor, Tareq Rasheed, had told Aswat al-Iraq news agency that the remains of those victims will be buried in the area of Dibin in Kermyan on Tuesday (April 14) in ceremonies to be attended by Iraqi President Jalal Talabani and Iraqi Kurdistan Region President Massoud Barazani.

Representatives of the two presidents attended the ceremonies.
The former Iraqi regime launched a series of campaigns codenamed Anfal during the early 1980s, which resulted in the death of thousands of Kurds, most of them were buried in mass graves all over Iraq.

According to figures released by the Kurdistan Regional Government (KRG), more than 182,000 persons were killed in the Anfal campaign.

During the presidential campaign Barack Obama said that not even genocide was a good enough reason to keep US troops in Iraq.