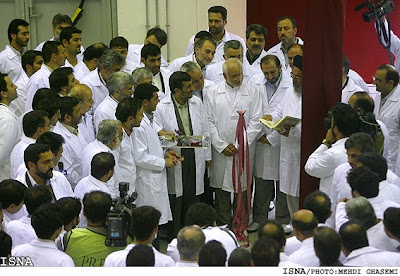 Mahmoud Ahmadinejad made the speech two days after the inauguration of the facility which produces uranium oxide pellets for a planned 40-megawatt heavy-water nuclear reactor near the town of Arak, central Iran.

Production of nuclear fuel pellets is the final step in the long, complicated chain of nuclear fuel cycle. The U.S. and its allies have expressed concern over Iran’s developing nuclear program for fear it masks a nuclear weapons program — a charge Iran denies.

Heavy-water reactors use a different process than light-water ones, but have their own nuclear proliferation concerns. The West fears Iran could eventually reprocess spent fuel from the heavy-water reactor to produce plutonium for a warhead.

“Today, with the grace of God, Iran is a country controlling the entire nuclear fuel cycle,” Ahmadinejad said on state television.

Barack Obama said in November that Iran’s pursuit of nuclear weapons was “unacceptable.”
Whatever.