It’s a done deal.
The regime in Iran announced today that it has installed around 7,000 centrifuges at its uranium enrichment facility. 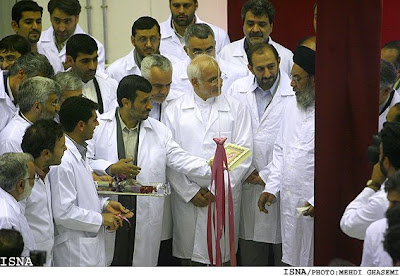 An Iranian official said today that the enemies of Iran have given in to the regime’s nuclear realities.
Fars News reported:

Head of the Presidential Strategic Studies Center Ali Reza Zaker Isfahani said on Wednesday that enemies of Iran have given in to the Islamic Republic and accepted the country’s nuclear realities.

“Fortunately, revolutionary steps of the Iranian people pave the ground for the enemies’ failure as well as acceptance of Iran’s nuclear realities,” Zaker Isfahani stated.

He underlined that Iranian President Mahmoud Ahmadinejad’s government could break the dominating international order by following the Late Imam Khomeini’s path, adding, “This has led to the acceptance of Iran’s nuclear energy right by the new US president, Barack Obama.”

Meantime, Iranian President Mahmoud Ahmadinejad announced on Wednesday that his country views the nuclear issue as a “closed case”.

“Today we consider the nuclear issue a closed case for the Iranian nation,” Ahmadinejad said, addressing a large and fervent congregation of local people in the central province of Isfahan.