This was either brave or foolish…
Inside the Turkish Parliament today, Barack Obama ripped on Turkey for the Armenian genocide of 1915.
This was a brave move for the young president who has shown general weakness in foreign policy.

The Politico posted a transcript of his speech today in Ankara:

I know there are strong views in this chamber about the terrible events of 1915. While there has been a good deal of commentary about my views, this is really about how the Turkish and Armenian people deal with the past. And the best way forward for the Turkish and Armenian people is a process that works through the past in a way that is honest, open and constructive.

We have already seen historic and courageous steps taken by Turkish and Armenian leaders. These contacts hold out the promise of a new day. An open border would return the Turkish and Armenian people to a peaceful and prosperous coexistence that would serve both of your nations. That is why the United States strongly supports the full normalization of relations between Turkey and Armenia.

It will be interesting to see how Turkey responds to this explosive statement.
Obama has previously called the slaughter of 1915 a genocide.
This is a very sensitive subject in Turkey.

In fact, people have been killed over this.
The Orthodox Christian editor of the Agos paper, Hrant Dink, angered Turkish nationalists with repeated assertions that the mass killings of Armenians during the early 20th century was genocide. He was murdered on January 17, 2007. 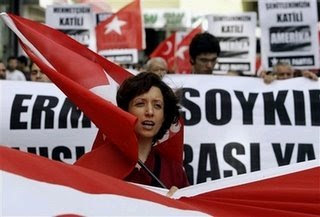 Members of the left-wing Workers’ Party wave Turkish flags as they chant slogans during a protest against the U.S. and its passing of a bill describing World War I-era killings of Armenians as genocide, Istanbul, Turkey, Thursday, Oct. 11, 2007. Despite intense lobbying by Turkish officials and opposition by U.S. President George W. Bush, the House Foreign Affairs Committee passed the bill by a 27-21 vote in 2007, a move likely to be considered an insult by most Turks. (AP/Murad Sezer)

We will know soon enough how Obama’s message was received in Turkey.

UPDATE: Of course Obama had to contrast the Armenian genocide to the the treatment of American indians.

UPDATE 2: Others are upset and say Obama did not recognize the Armenian Genocide during his speech.