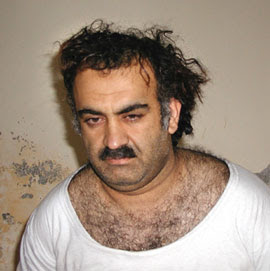 Khalid Shaikh Mohammed was the mastermind behind the 9-11 attacks that killed 3,000 in New York, Washington DC and Pennsylvania. He is also thought to have had, or has confessed to, a role in many of the most significant terrorist plots over the last twenty years, including the World Trade Center 1993 bombings, the Operation Bojinka plot, an aborted 2002 attack on Los Angeles’ U.S. Bank Tower, the Bali nightclub bombings, the failed bombing of American Airlines Flight 63, the Millennium Plot, and the murder of Daniel Pearl- Wikipedia.

CIA interrogators waterboarded an Al Qaeda prisoner 183 times, according to a 2005 Justice Department legal memo, and another prisoner 83 times, the New York Times reported on Monday.

Quoting the CIA inspector general in a 2004 investigation, the memo from May 30, 2005 says interrogators used the waterboard at least 83 times during August 2002 against Abu Zubaydah, a high-ranking member of Al Qaeda and close associate of Usama bin Laden, the Times said.

In March 2003, the controlled method of simulated drowning was used on Khalid Shaikh Mohammed, the admitted mastermind of the Sept. 11, 2001 attacks that killed nearly 3,000 Americans, 183 times.

The Times said some copies of the memos appeared to have the number of waterboardings redacted while others did not.

More than 100 harsh interrogation methods were used on Mohammed, causing some CIA officers to question if the legal limit had been crossed, the Times previously reported in 2007.

President Obama has banned the use of waterboarding, overturning a Bush administration policy that it did not constitute torture.

According to a former intelligence agent, waterboarding of Abu Zubaydah got him to talk in less than 35 seconds. The technique, which critics say is torture, probably disrupted “dozens” of planned al-Qaida attacks and saved hundreds and thousands of lives.

Look for the Left to get weepy over the treatment of these killers.

Related… Doug Ross has more on Obama’s decision to release this information to the public despite the objections from 4 former CIA directors.