He thought long and hard and decided there was only one gift deserving of the Queen of England…
An iPod with his speeches on it. 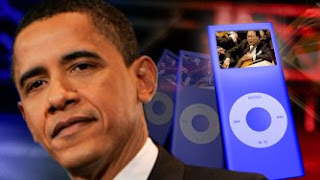 Of course.
Obama uploaded speeches of himself on the iPod gift he gave the Queen of England.
Jake Tapper reported:

Uploaded onto the iPod:

More… How Appropriate: Obama’s iPod for the Queen Includes ‘Send in the Clowns’

Previously:
Obamas Embarrass America- Give Queen an iPod… She Already Has One (Video)