Hillary said the US policy towards Cuba has failed.
For whom? 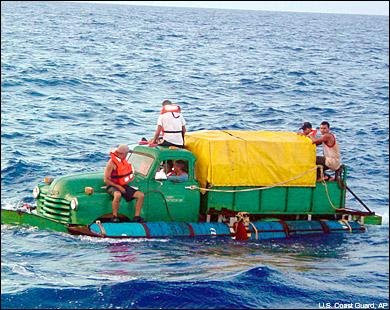 We don’t see any Americans driving trucks across the Gulf of Mexico to escape the US.

We don’t hear about any American rock stars drowning in the Gulf trying to escape the US.

US Secretary of State Hillary Clinton has said that US policy towards Cuba has failed, welcoming an offer to talk from the Cuban president.

She said the US was “taking a serious look” at how to respond to President Raul Castro’s comments, which she called an “overture”.

Mrs Clinton made her comments about Cuba in the Dominican Republic, ahead of the Summit of the Americas that begins in Trinidad and Tobago later on Friday.

“We are continuing to look for productive ways forward because we view the present policy as having failed,” she said at a press conference.

Is it really America’s fault that the Castro brothers want to keep their Marxist grip on Cuba?

Verum Serum thinks Hillary may be in for a surprise.