Hamas TV calls for the annihilation of the Jews and compares Jews to dogs.
To view the clip go here. 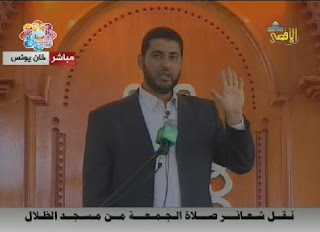 This latest segment from MEMRI TV are excerpts from a Hamas Friday sermon, which aired on Al-Aqsa TV on April 3, 2009:

“We Muslims know best the nature of the Jews, because the Koran has informed us about this, and because the pure Sunna of the Prophet Muhammad has devoted much space to informing the Muslims of the truth about the Jews and their hostility to Islam and its Prophet.” […]

“[In] ‘The Protocols of the Elders of Zion,’ The Jews Included Their Plan… Jews Today Are Weaving Their Spider Webs in Order to Encircle Our Nation”

“Their famous book, the existence of which is denied by the reasonable people among them, the so-called Protocols of the Elders of Zion – but we call it the Protocols of the Idiots of Zion… In this book, the Jews included their plan to besiege the whole world by land, by air, by sea, by ideology, by economy, and by the media, as is happening today, my brothers in the nation of the Prophet Muhammad. The Jews today are weaving their spider webs in order to encircle our nation like a bracelet encircles the wrist, and in order to spread corruption throughout the world.” […]

“Allah Willing, The Moment Will Come When… Not a Single Jew Or Zionist is Left on the Face of the Earth”; “Dogs And Pups Bark and Bite, and… Are Impure – That Is The Truth About the Jews”