Patriot’s Creed is reporting on a disturbing injustice against a US soldier.
1st Lieutenant Michael Behenna was sentenced to 25 years for killing a known Al-Qaeda member in Iraq. Reportedly, the government withheld evidence during the trial that would have kept Michael from prison. Behenna said during the trial he was acting in self defense. 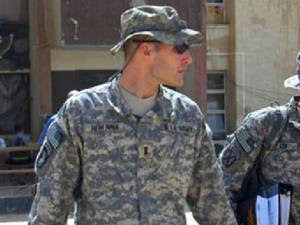 On March 20th, 2009, 1st Lieutenant Michael Behenna was sentenced to 25 years in prison for killing a known Al Qaeda operative while serving in Iraq. The “victim”, Ali Mansur, was known to be a member of an Al Qaeda cell operating in the lieutenant’s area of operation, and was suspected to have organized an attack on Lt. Behenna’s platoon in April 2008 which killed two U.S. soldiers and injured two more. Army intelligence ordered the release of Mansur and Lt. Behenna was ordered to return the terrorist to his home.

During the return of Mansur, Lt. Behenna again questioned the Al Qaeda member for information about other members of the terrorist cell, and financial supporters. During this interrogation, Mansur attacked Lt. Behenna, who killed the terrorist in self-defense. The government subsequently prosecuted Lt. Behenna for premeditated murder.

Not only is this a miscarriage of justice on the behalf of Lt. Behenna, who was acting to prevent further loss of life in his platoon, it is demoralizing to the U.S. troops who continue to fight on behalf of the freedom and security of our nation. Whether it is U.S. border patrol agents, members of the armed forces, or FBI agents, no individual who is serving on the frontlines in the War on Terror should be so blatantly mistreated.

We urgently need your help to correct this terrible wrong against a loyal and faithful soldier. Please contact your congressman and ask them to intervene on behalf of 1LT Behenna.

Here are the key points that were withheld during the trial:

**Prosecution expert Dr. Herbert MacDonnell initiated contact with defense attorneys explaining his agreement with the testimony of Lt. Behenna and his presentation to prosecutors supporting Lt. Behenna’s version of events.

** Dr. MacDonnell is not called to testify in the case.

** Jack Zimmermann, defense counsel, asks prosecutors if they have any exculpatory evidence that should be provided to the defense (referring to Dr. MacDonnell’s demonstration). Prosecutors deny having any such evidence.

** Prosecutors withholding of this evidence allowed them to argue that Lt. Behenna executed Ali Mansur while seated when the forensic experts, including Dr. MacDonnell, agree that Ali was standing with his arms outstretched when shot

**Lt. Behenna is convicted of unpremeditated murder and assault.

You can learn more about this case and offer your support at the Defend Michael Behenna website.

Meanwhile… Those innocent Uighurs, trained by Al-Qaeda in Tora Bora, will be released in the US and given financial assistance.