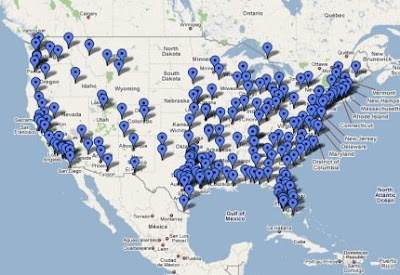 Sean Hannity announced this week that he will attend the Atlanta Tea Party Protest at the state capital. Dick Armey will also attend.

The St. Louis Tea Party Protest will be held at Keiner Plaza at the corner of Market and Broadway.
Hennessey’s View has more information.
The Facebook page is here.
Local radio host Dana Loesch is also helping with the St. Louis protest.

Over 300 cities are confirmed for the Tax Day protests.

More… Don’t miss this. Glenn Reynolds has terrific video on the upcoming protests.

Jim Hoft
Jim Hoft is the founder of The Gateway Pundit, one of the top conservative news outlets in America. Jim was awarded the Reed Irvine Accuracy in Media Award in 2013 and is the proud recipient of the Breitbart Award for Excellence in Online Journalism from the Americans for Prosperity Foundation in May 2016.
Nashville Mayor Shuts Down 4th of July Celebrations but Allows Black Lives Matter to Protest America on Independence Day
Driver Involved in I-5 Seattle Collision of Female Protesters at 1:30 in Morning Is Doxxed -- Antifa Calls Him "Racist Monster" but He's Black
CNN Then and Now: Mt. Rushmore During Obama Visit - "Majestic, Quite a Sight" - Mt. Rushmore During Trump Visit - "Monument to Two Slave Owners"
Black Lives Matter Protesters Dance and Stand on US Flag in DC Plaza on July 4th Holiday
Trump Speaks at Mount Rushmore on Patriotism and American Greatness - NY Times Calls It a "Dark and Divisive Speech"
See more...