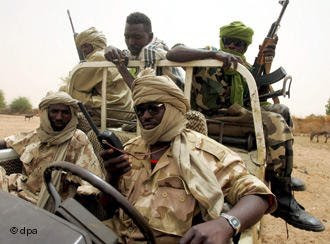 The Janjaweed militia which President Al-Bashir has recruited and armed is responsible for the deaths of 400,000 Africans from the Fur, Masalit and Zaghawa ethnic groups. Over 2,500,000 Africans have been displaced in the process.

Sudan’s leader welcomed on Monday “positive signs” sent by U.S. President Barack Obama to the Islamic world, striking a more conciliatory tone towards Washington, seen as an enemy of Khartoum in the past.

“We, our brothers and sisters, are seekers of peace and stability and we do not want our country to live under the shadows of swords and tension,” President Omar Hassan al-Bashir said at the opening of the eighth session of parliament.

“Our hands remain held out to those who call for peace and justice in accordance with the standards of fairness and dignity,” he added, echoing a phrase used by Obama in his inauguration address.

The genocide in the Darfur region of Sudan has claimed 400,000 lives and displaced over 2,500,000 people. More than one hundred people continue to die each day; five thousand die every month.