This fits…
The Sun mocked Dr. Evil’s trillion dollar plan to save the world.
Spend-Spend-Spend 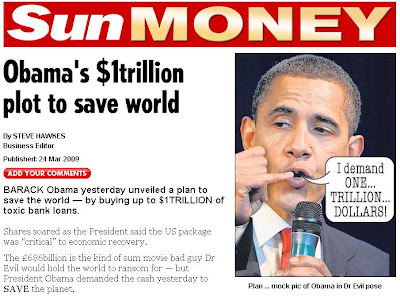 Europe and the G20 are getting their first glimpse of the socialist in the White House.
It’s the new Era of Barack, baby!

Victor Davis Hanson described what is in store for Europe during the Age of Obama, via Yid With Lid:

In some sense, the Obama administration will bring a new honesty to European-American relations. For the last eight years, Europeans have had it both ways. Bush took out Saddam Hussein, removed the Taliban from power, hunted terrorists, offered firm security guarantees to the Europeans in their squabbles with the Russians, tried to box in Iran, and ran trade deficits with his free-trade policies. For his efforts, he was caricatured as a cowboy buffoon by European sophisticates.

But now after welcoming Obama, the Europeans are beginning to discover that they must contend with a new administration to the left of themselves. And as we saw with Obama’s recent cavalier treatment of visiting British prime minister Gordon Brown — he was given a packet of DVDs, unviewable in Europe, as a going-away gift — Obama doesn’t seem convinced of any special relationship with Europe. His interests and priorities lie more in Asia, Latin America, and Africa — places that have also been the great sources of immigration to America the last half-century.

So, it will be harder for Europeans to pull off the old two-step of quietly wanting the U.S. to deter threats while loudly deploring our Neanderthal reliance on brute force.

As Afghanistan turns from a joint NATO project into an American war, the Obama administration may well conclude that if we don’t have European allies against the Taliban, we won’t elsewhere. Perhaps NATO will be seen as a Cold War relic, with no place in Obama’s brave new multipolar world.

Given Obama’s plans to emulate Europe’s expensive socialist entitlement system, there may be less money for defense. Ironically, that would mean less American protection abroad of a disarmed socialist Europe — a continent sandwiched between North Africa, the Middle East, and Russia, with millions of unassimilated Muslim immigrants at home.

In matters of foreign policy, Obama likewise has outflanked the Europeans. His calls for talks without restriction with the Iranians; his offer to pour hundreds of millions into Gaza; his outreach to the Syrians; and his popular resonance in South America, the Middle East, and Africa suggest that a leftist America now has more in common with some of these former European colonies than do the centrist Europeans.

It was once easy to slur Bush’s War on Terror as typical American overkill. But now Europeans had better worry that someone in the Obama administration will notice that the renditions, preventative detentions, wiretapping, and summary deportations practiced in parts of Europe were often as authoritarian as anything Bush embraced.

So how long before the Obama pixie dust wares off?

Jim Hoft
Jim Hoft is the founder and editor of The Gateway Pundit, one of the top conservative news outlets in America. Jim was awarded the Reed Irvine Accuracy in Media Award in 2013 and is the proud recipient of the Breitbart Award for Excellence in Online Journalism from the Americans for Prosperity Foundation in May 2016.
HISTORIC PRESIDENCY! President Trump Announces Israel and Sudan Normalization Agreement -- Third Muslim Country to Announce Peace Deal with Israel
Trump Campaign Releases Devastating Digital Ad on Biden Family International Dealings and Mass Corruption (VIDEO)
WOW! Joe Biden Says He Will Mandate Mask Wearing on All Interstate Highways -- in Your Vehicle (VIDEO)
"I Am Glad They Are Finally Taking an Interest In these Concerning Financial Matters" - Senator Ron Johnson Releases Statement on FBI Meeting with Biden Associate Tony Bobulinski
New Jersey Mayor Opens Food Boxes, Removes and Replaces Trump Letter With His Own
See more...