UPDATE: Here’s the video of Obama bowing to Saudi King Abdullah:
(At 1:37 mark)

Proper protocol is to bow before the Queen of England.
Barack didn’t do that… And, he shook her hand with 2 hands– another gaffe.

But, he bowed to Saudi Arabia’s King Abdullah. 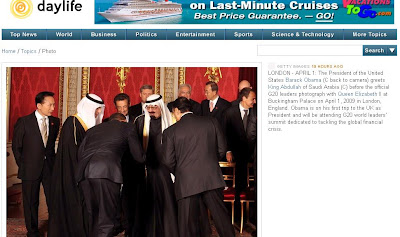 Here is the Getty page with the photo.

UPDATE: Michelle Malkin posted video of the bow from a different angle.