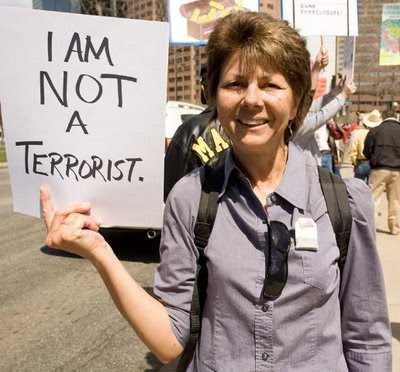 Photo via Looking at the Left at the Denver protest yesterday.

But in an interview on Fox TV in San Francisco, Speaker Nancy Pelosi (D-Calif.) chalked up the GOP grass-roots effort as “AstroTurf.”

“This initiative is funded by the high end; we call it AstroTurf, it’s not really a grass-roots movement. It’s AstroTurf by some of the wealthiest people in America to keep the focus on tax cuts for the rich instead of for the great middle class,” Pelosi said.

Other House Democratic leaders took a different tack: One senior aide has been circulating a document to the media that debunks the effort as one driven by corporate lobbyists and attended by neo-Nazis…

In addition, the tea parties are “not really all about average citizens,” the document continues, saying neo-Nazis, militias, secessionists and racists are attending them. The tea parties are also not peaceful, since reporters in Cincinnati had to seek “police protection” during one of the events, it states.

This likely explains the smear by liberal reporter Charles Jaco on Channel 2 News this week. Jaco reporter that the protest in St. Louis was organized by an extremist group.
Jaco, no doubt, got his talking points from some national liberal group.

Local organizers Bill Hennessey and Dana Loesch demanded a retraction by FOX 2 for the dishonest report on the protest. The St. Louis Tax Day Tea Party scheduled for Kiener Plaza at 6:30 p.m. on Wednesday April 15, was organized wholly by Bill Hennessy, a blogger, Dana Loesch, a blogger and talk radio host, and a small number unaffiliated volunteers.

So, just who was doing the “Astroturfing”?

More… Obama’s chief strategist is the master of “Astroturfing” and has a second firm that shapes public opinion for corporations.