Can we call them commies, yet?
Congressional democrats heaped praise on Fidel Castro after their meeting yesterday. 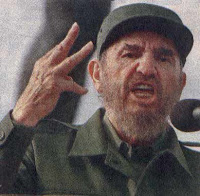 The Politico had more on the Castro’s meeting with the useful idiots:

Key members of the Congressional Black Caucus are calling for an end to U.S. prohibition on travel to Cuba, just hours after a meeting with former Cuban president Fidel Castro in Havana.

“The fifty-year embargo just hasn’t worked,” CBC Chairwoman Barbara Lee (D-Ca.) told reporters this evening at a Capitol press conference after returning from a congressional delegation visit to Cuba. “The bottom line is that we believe its time to open dialogue with Cuba.”

Lee and others heaped praise on Castro, calling him warm and receptive during their discussion. But the lawmakers disputed Castro’s later statement that members of the congressional delegation said American society is still racist.

“It was quite a moment to behold,” Lee said, recalling her moments with Castro.

“It was almost like listening to an old friend,” said Rep. Bobby Rush (D-Il.), adding that he found Castro’s home to be modest and Castro’s wife to be particularly hospitable.

“In my household I told Castro he is known as the ultimate survivor,” Rush said.

“He listened. He said the exact same thing” about turning the page “as President Obama said,” said Richardson.

Imagine?… He said exactly the same thing as Baracl Obama did.

Fausta has reaction from Cuba on the meetings.