Honoring the 44th President of the United States.
Chia Obama 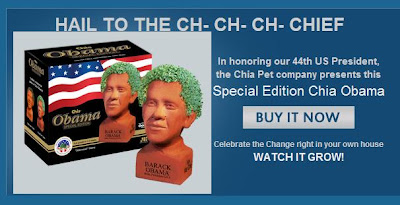 Change you can water.

The Chia Obama will no longer be available at certain Florida stores.
It was offensive.
MyFOX Tampa Bay and Free Republic reported:

Some local Walgreen’s stores are pulling a supposed likeness of President Barack Obama off their shelves. The ‘Chia Obama’ will no longer be sold there.

Walgreen’s spokesman Michael Polzin explained to FOX 13 that local store managers have the ability to purchase and market products — like the Chia Obama — on their own.

But now, the corporate office has asked stores to pull the product from their stores because, he said, it is not appropriate for the company’s corporate image.