The anti-capitalist to bankers:
“My Administration Is Only Thing Between You & the Pitchforks” 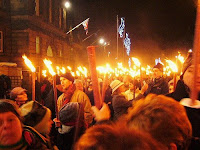 That sounds like something a socialist community organizer would say.
Oh… Never mind.
The Politico reported:

The bankers struggled to make themselves clear to the president of the United States.

Arrayed around a long mahogany table in the White House state dining room last week, the CEOs of the most powerful financial institutions in the world offered several explanations for paying high salaries to their employees — and, by extension, to themselves.

“These are complicated companies,” one CEO said. Offered another: “We’re competing for talent on an international market.”

But President Barack Obama wasn’t in a mood to hear them out. He stopped the conversation and offered a blunt reminder of the public’s reaction to such explanations. “Be careful how you make those statements, gentlemen. The public isn’t buying that.”

“My administration,” the president added, “is the only thing between you and the pitchforks.”

That was a pretty arrogant statement by Mr. Awesome.
Not everyone is blaming the bankers.