The Obama Administration Currently Has No Plan to Close the Border–
The virus has killed up to 60 people in Mexico so far. 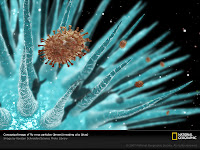 The Center for Disease Control and Prevention announced today that it is already too late to contain the swine flu outbreak in the US.
Alert.net reported:

The U.S. Centers for Disease Control and Prevention said on Friday it was too late to contain the swine flu outbreak in the United States.

CDC acting director Dr. Richard Besser told reporters in a telephone briefing it was likely too late to try to contain the outbreak, by vaccinating, treating or isolating people.

“There are things that we see that suggest that containment is not very likely,” he said.

At least 8 cases of H1N1 have been identified in California and Texas.