The DNC released a statement this week that they had collected 642,000 signatures of pledges from across the country in support of Obama’s massive budget.

They even wrote about it at the DNC blog: 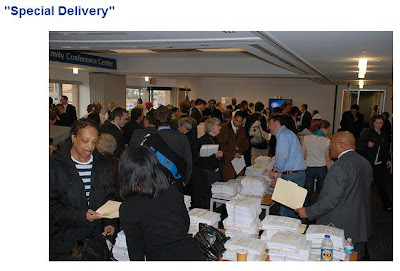 Too bad it’s not true.
They fudged their numbers… by a few hundred thousand.
FOX News reported:

Democrats descended on Capitol Hill Wednesday to deliver hundreds of thousands of pledges from across the country in support of President Obama’s budget. The signatures were harvested during a massive effort to tap the president’s huge e-mail list and capitalize on a 50-state, door-to-door campaign.

The official DNC release read, “Supporters of President Obama’s budget to hand deliver 642,000 pledges….” CNN and the Huffington Post reported the DNC’s claim. But the truth is somewhat more complicated.

The president’s e-mail list of 13-million resulted in just 114,000 individual pledges — a response rate of less than 1 percent. Party workers secured another 100,000 signatures by hitting the streets. The DNC arrived at its 642,000 figure by making three photocopies of each petition so that every signer’s senators and representative could get one.

DNC spokesperson Natalie Wyeth responded: “This effort was designed to give our supporters the tools to influence their elected officials. Of course we delivered a pledge to each of their members of Congress — 642,000 pledges. That’s what we said we were delivering and that’s what we did.”

When asked about the impression in the DNC press release that there were 642,000 unique pledges, she offered no response.

Could you even imagine how the Obamedia would react if the GOP did something this dishonest?