After attacking the “Zionist Regime” at the UN human rights council last week in Geneva. Switzerland, Mahmoud Ahmadinejad handed out Israeli oranges to get people to his rally in Islamshahr. 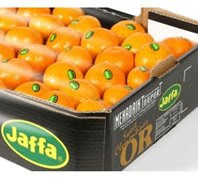 Some of the most delicious oranges eaten around the world are produced in Israel including the Jaffa oranges. (Israel21c)

In another freebies for votes stunt, Ahmadinejad’s camp announced free orange handouts to people when he was due to hold an election rally in the poor district of Islamshahr. Of course the stunt worked and as predicted, large throngs who would not miss the opportunity of getting fresh juicy oranges for free, turned up. There was however one problem. The oranges were Israeli oranges with obvious ‘Jaffa’ labels still on them!

So shortly after President Ahmadinejad using the platform handed to him on a plate by the UN summit to recruit extremist and militant minds in the Middle East, the self styled champion of the oppressed Palestinian people was handing out Israeli oranges for the rent a crowd mob.

Iranian authorities also reported that the Jaffa oranges distributed in Tehran over the weekend were actually fruit from China and were not from Israel.