A gunmen took over the immigration center in Binghamton, New York today.
There were as many as 41 hostages in the building.
Local FOX News has video here.
A local official says the gunman used his car to barricade the rear door of the building and then entered through the front.

Officials are now reporting that the gunman shot himself.
The suspected gunman carried identification with the name of 42-year-old Jiverly Voong of nearby Johnson City, N.Y., a law enforcement official said. 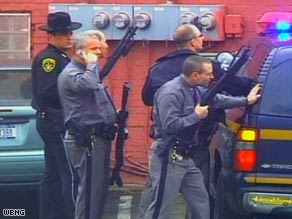 Local WBNG News says officials have confirmed 12 deaths.
Local police say 12 are dead.
FOX News is reporting that 13 are dead.
ABC reported that 26 were wounded in the attack.

A gunman opened fire in an immigration centre in a sleepy American town killing as many as 13, according to reports tonight.

Another 41 people are still being held hostage inside the building, an immigration centre in Binghampton, New York state.
Witnesses described the gunman, who was said to be Asian and in his 20s, parking his car at the rear of the centre, walking inside and then firing indiscriminately.

It was around 10.30am local time and many dozens of people were attending the site for English classes as well as citizenship sessions.

Several people are hiding in a closet in the building:

Scanner reports say a man went into the building and started shooting.
When the shooting started, people inside escaped to the basement in search of safety. More than a dozen people are hiding in a closet, for more than an hour now. Emergency dispatchers are in contact with some people inside by phone. Police have sent some people to Wilson and Lourdes Hospital, and have requested ambulances to the scene.

Police have shut down Court Street heading west at Water Street. They have also closed Main Street at Murray Street. Binghamton High School has locked down the school, and will not allow students out for lunch.

The Press Connect from Binghampton posted this google map of the center: 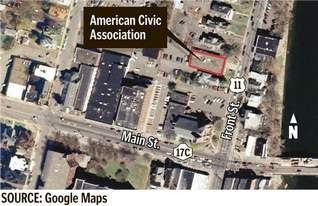 More on the suspect:

The suspect was described as an Asian male in his 20s, between 5-feet 8-inches and 6 feet tall, wearing a bright green nylon jacket and dark-rimmed glasses… Broome Community College Assistant Professor Tuong Hung Nguyen was asked to work with police to communicate with the shooter. Nguyen is fluent in Vietnamese.

Two people were taken from the American Civic Association with their hands cuffed behind their back.

UPDATE: How sad. The killer’s victims were taking their citizenship exam.