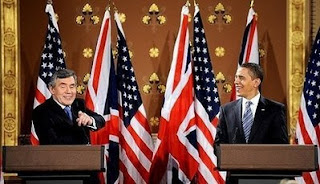 British Prime Minister Gordon Brown (L) and US President Barack Obama address a press conference in the Lacarno Treaty Room at the Foreign and Commonwealth Office near 10 Downing Street in London. (AFP)

The poor Brits were in for a big letdown today.
Dear Leader bored them to tears at his press conference with Prime Minister Brown in London.
The Daily Mail reported:

Allegedly the most charismatic politician in the world, Mr Obama was a disappointment. It sounded as though he had a blocked nose and so his lack of energy may have been a symptom of a cold. Jet lag, too. He probably wished he could have stayed in bed.

He spoke slowly, in a meandering manner. Some might say that he was thoughtful and professorial. Others might call his manner circuitous, even yarny. Am I saying that he was a bore? Oh dear. I find that I possibly am.

Maybe it was because Obama was without his TelePrompter?