At least 90 people were killed in an earthquake in Italy today.
As many as 50,000 may be homeless from the worst earthquake in 30 years.
Sky News has video:

The 13th Century mountain town of L’Aquila was worst hit by the quake.
Reuters reported:

A powerful earthquake struck a huge swath of central Italy as residents slept on Monday morning, killing more than 50 people and making up to 50,000 homeless.

Most of the dead were in L’Aquila, a 13th-century mountain city about 100 km (60 miles) east of Rome, and surrounding towns and villages in the Abruzzo region.

Houses, historic churches and other buildings were demolished in the worst quake to hit Italy in nearly 30 years. 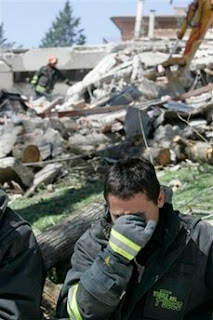 A firefighter reacts as he stands next to the site where a four-storey building collapsed following a earthquake in L’Aquila, central Italy, Monday, April 6, 2009. A powerful earthquake in mountainous central Italy knocked down whole blocks of buildings early Monday as residents slept, killing at least 50 people and trapping many more, officials said. Interior Minister Roberto Maroni, arriving in L’Aquila hours after the quake, said at least 50 people had been killed and that the toll was likely to rise as rescue crews clawed through the debris of fallen homes. L’Aquila is the capital of the Abruzzo region and lies in a valley surrounded by the Apennine mountains. (AP/Pier Paolo Cito)

Drudge is reporting that Italy muzzled scientist who foresaw quake.

UPDATE: At least 60 survivors were pulled from the rubble today.