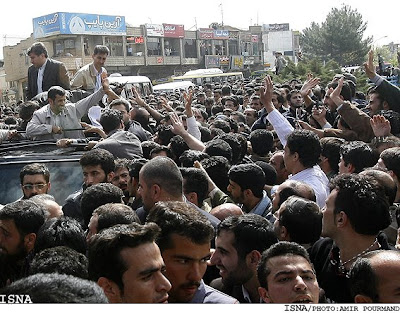 Ahmadinejad told an audience in Isfahan on Wednesday that the US was “mentally handicapped” for stockpiling nuclear weapons.
Ahmadinejad also stressed that the issue of nuclear energy was a done story.
Iranian Republic News Agency reported:

The president further said that some American officials have recently said that Iran could have nuclear technology for peaceful purposes but is not allowed to seek nuclear bombs. “To this, I say: the Iranian nation has never sought nuclear weapons because it believes that those who stockpile nuclear bombs and work hard to keep them for themselves are mentally handicapped in the game of politics since they have failed to realize that the era of bombs, military actions and threats is long over.”

Stressing that the issue of nuclear energy is a done story for the Iranian nation, he addressed American officials, saying: “One of the most important things which has to happen is that US authorities should change their tone when talking to nations because you are in no way entitled to determine nations’ lifestyles; the most you are allowed to do is to define good and evil for your own nation.”