As expected, the UN racism conference turned into a major Jew-bash today.
Several nations walked out after Ahmadinejad attacked Israel as a racist state and denied the Holocaust during his speech today.

Protesters screamed from the balcony during Mahmoud’s speech and a crazy-haired clown protester was walked out during his rant:

Here is the latest report from the Iranian Republic News Agency:

President Mahmoud Ahmadinejad in the international Durban Review Conference (Durban 2) on Monday criticized the performance of the United Nations Security Council in backing the racist Zionists.

The Iranian president questioned the legitimacy of the right to veto and described the Zionist regime as racist. He underlined that the United Nations Security Council (UNSC) helped stabilize the fabricated regime in Palestine.

Since the Iranian president labeled the Zionists as racists, the move was welcomed by participants in the conference but the supporters of the Zionist regime staged a walk out.

Ahmadinejad called Israel the “most cruel and racist regime.”

He followed by blaming the United States, Europe and Israel for the world’s financial crisis, but shrugged off a question later about whether the U.S. not attending the conference would further hurt relations between the two countries.

Protestors stormed the stage when Ahmadinejad began speaking and several Western delegates walked out of the room after the Iranian president said Israel was created on the “pretext of Jewish suffering” from World War II.

Elie Wiesel, who survived the Holocaust, was at the conference to protest Ahmadinejad’s participation. 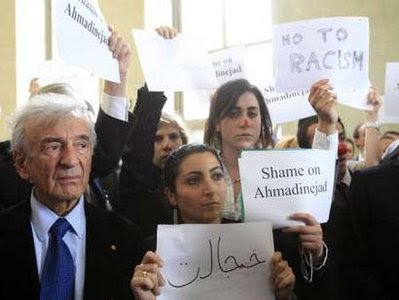 Nobel Laureate Elie Wiesel (L) takes part in a demonstration outside the press conference room after Iran’s President President Mahmoud Ahmadinejad addressed the Durban Review Conference on racism at the United Nations European headquarters in Geneva April 20, 2009. United Nations officials sought on Monday to salvage a U.N. racism conference that Washington and its major allies are boycotting over concerns that it will be used as a platform for attacks against Israel. (REUTERS/Denis Balibouse)

I am of Jewish ancestry, so of course I observe Yom HaShoah. Iran can also deny that the sun rises in the East and sets in the West. Lying is easy: You simply deny the truth. Yes, with Yom HaShoah and Hitler’s “birthday” coinciding with the start of this awful convention, the timing of this conference is not lost on me. It is not coincidental.

Of course I am devoted to the gentle, eternal ideals (e.g., the Ten Commandments) of my ancestors, most butchered by Hitler’s SS. And, my Christian brothers and sisters, you know that had Hitler not rushed in his defeat to his bunker to conduct botched revolver-surgery on his brain, the Nazis would’ve come for you. Mein Kampf lashes out at Christianity, not “just” Judaism: You can almost see that now Hell-dwelling monster frothing at the mouth as he blames Judaism for giving rise to (horrors) Christianity.

Hitler had a plan, and he wasn’t even halfway done when the Allies crushed the Axis. I won’t repeat the famous quote that ends with “…and then they came for me….”