WTAE reported that 3 cops were shot dead today.
Five police officers were shot in total.
One of the officers reportedly was shot in the back. 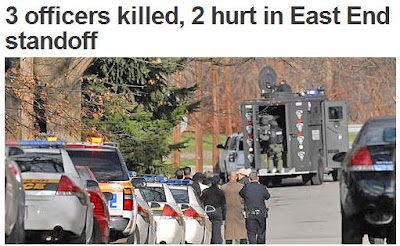 The gunmen, Richard “Pop” Poplawski, 23, is under arrest.
CNN reported that 2 cops were killed in a shooting this morning.
CNN reported:

At least two Pittsburgh police officers were killed Saturday and two wounded after they responded to a call about a domestic dispute, two CNN affiliates reported, quoting police sources.

WTAE-TV and WPXI-TV both reported the deaths.

Shots came from inside a home in the Stanton Heights neighborhood of the western Pennsylvania city. No one could reach the officers who were shot, and they remained in the line of fire, police spokeswoman Diane Richards said earlier at a news conference.

The incident began about 7 a.m., Richards said. An hour later, there was a volley of 70 to 80 shots, and an hour after that there were about a dozen more. iReport.com: Are you there? Share your story

Richards, who said there also was a second person in the home, said police didn’t know what prompted the standoff. Officers had been negotiating with the shooter.

The Post-Gazette has more on the killer:

Mr. Poplawski, who is in his early 20s and lives in the house, according to neighbor and longtime friend Joe DiMarco. Mr. DiMarco and his mother, Darlene, said they spoke to Mr. Poplawski on the telephone this morning.

“He told me he loved me and that he’d been shot in the chest and leg,” Ms. DiMarco said.

She also said Mr. Poplawski’s mother and possibly his grandmother were in the house with him.

A witness told FOX News that Poplawski was recently discharged from the military.
The witness said he did not make it through boot camp.