Hopefully, they will get their wish soon. 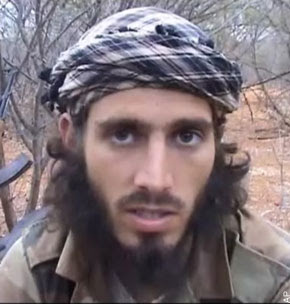 A man who claims to be an American Al Qaeda member, goes by the name Abu Mansour al-Amriki. (NY Post)

It is interesting that no one has recognized and identified these two Americans.
FOX News reported:

For several months the FBI has been investigating at least 20 Somali-American men from the Minneapolis area and elsewhere in the United States who traveled to war-torn Somalia to join the terrorist group al-Shabaab, which has been warring with the moderate Somali government since 2006.

Last month, a source familiar with the FBI investigation told FOX News that “several” of the men had returned to the United States, while others “are still there [in Somalia].” Today is the first time any of these men have spoken publicly.

“We came from the U.S. with a good life and a good education, but we came to fight alongside our brothers of al-Shabaab … to be killed for the sake of God,” one man said at the press conference, as translated by Omar Jamal, the executive director of the Somali Justice Advocacy Center in St. Paul, Minn.

According to the news report, two men, identifying themselves as Abu-Muslim and Abu Yaxye, said they are “Somali youth” from the United States who are now stationed near the city of Kismayo, more than 300 miles southwest of Mogadishu, according to Jamal. The men said they are talking to media for the first time so others can learn why they joined al-Shabaab, he said.