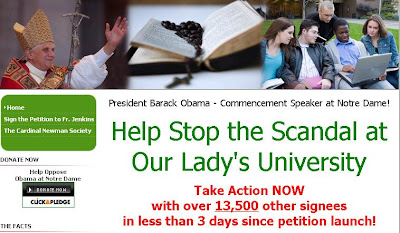 But, Obama’s record doesn’t bother Notre Dame University.
Today 10 priests from the Holy Cross Order that founded Notre Dame warned that the university risks its “true soul” by inviting Barack Obama to graduation.
The priests say the school will distance itself from the Roman Catholic faith.
Notre Dame will honor Barack Obama at commencement ceremonies this year.
The Union reported:

Ten priests from the order that founded the University of Notre Dame say the school risks its “true soul” and could distance itself from the Roman Catholic Church by inviting President Barack Obama to campus next month.

The members of the Congregation of the Holy Cross, which helps run the university, asked the Rev. John Jenkins, the Holy Cross priest who is Notre Dame’s president, and the university’s board of fellows to reconsider the invitation to Obama because he supports abortion rights.

“Failure to do so will damage the integrity of the institution,” said the letter published Wednesday in Notre Dame Observer.

Notre Dame announced last month that Obama would deliver the university’s May 17 commencement address and receive an honorary degree. The decision by the nation’s best-known Catholic university sparked widespread anger among many Catholics who said Notre Dame should not honor someone whose policies on abortion and embryonic stem-cell research clash with core church teachings on human life.

Hundreds of abortion opponents protested on campus Sunday, and the priests said the invitation has opened a “fissure” between Notre Dame and many bishops. More than a dozen bishops have denounced Obama’s appearance, including Cardinal Francis George of Chicago, president of the U.S. Conference of Catholic Bishops.

Jenkins has said the university does not condone all of Obama’s policies, and spokesman Dennis Brown has said Notre Dame does not plan to rescind the invitation.